Situated in Princeville, on the Northshore of Kauai and Located on the foot hills of Hanalei Bay, the Hanalei Ranch is located in the Garden Isles most sought after destination. This rare 6-parcel offering of approximately 229 acres features 3-residential dwellings, 2 barns, 4-wells, large 2” water meter and the ability to build at least five more residential dwellings. Finite, Private, Secure and Acreage some of the most important features that make for a ’Collectable’ or heirloom asset. Hanalei Ranch is conveniently placed at the edge of The Princeville Resort and approximately 5-minutes from the Princeville Airport, 5-minutes from Downtown Hanalei and 40-minutes from the Lihue Airport. The property offers many uses including the ability to be held as a large private ranch estate and or parcels sold separately. There are currently bison, fish, fruits and vegetables being grown and raised on site. The lower flat lands act as the bison ranch and agriculture grounds and the higher elevations serve as the residential sites facing west with stunning ocean views and year round sunsets. Serving as a home to many indigenous plants and animals the Hanalei Ranch offers a National Geographic like atmosphere with turtles, ducks and the beautiful Pueo Hawaiian owl to name a few. The property was even filmed by National Geographic in the past. For a truly unique nature experience, one can launch canoes, kayaks or paddle boards amongst the meandering Hanalei River which surrounds the property. All this just a short distance from the dramatic landscape and geography of the 4,000 foot Na Pali Coast cliffs.

Hanalei Bay is truly a special place like no other in the world. Stroll the two miles of white sandy beach of while gazing at the commanding surrounding mountains.  One can imagine the fertile verdant green fields of the Hanalei basin and a variety of lush fields to deciduous forest to rich marsh lands.  As you gaze into the horizon of the Pacific Ocean you can see the famous Lumahai Beach, and Bali Hai where the movie South Pacific was filmed. The adjacent taro fields were once rice patties during the early 1900's and in the late 1900's went back to taro.

Resembling dreams of sweet air, soft gentle breezes, and warm sunshine caressing your face along with colorful rainbows filling the sky and songs of exotic birds, The Hanalei Ranch truly allows dreams to come true. Perched on the slopes of Hanalei Bay this property boasts breathtaking panoramic vistas of green hues of the magnificent Hanalei Valley and mountains, flowing plains, and The Hanalei Pier and beach below. The lush landscaped setting showcases waterfalls of rain water filtered down from the lush green Hihimanu, Namolokama and Mamalahoa Mountain peaks. Each of these mountain peaks are carved from Mount Waialeale at the center of the island, where they disburse into the beautiful waterfalls that grace the scenery. Hanalei meaning “Lei Making” as well as “Crescent” indicative of the local bay.  This exotic paradise truly embodies peace and serenity. Let the warm raindrops and early morning dew mesmerize your senses.  Flowering fauna fill the air with sweet scents whisked on gentle breezes. Experience the natural beauty in its most pristine sense.

These pristine lands have been family owned for generations and are ready to be shared with the next steward of the land.

• Stroll down the “black pot beach” to the historic Hanalei pier which has been a local gathering place for years, and is notarized as a National Historic Site.

•  Hiking at the famous Kalalau trail along the Napali Coast

• Watersports such as tubing, windsurfing, snorkeling, scuba diving, surfing, sailing, fishing, kayaking, canoeing.
Whether you choose to eat at one of many casual restaurants in Hanalei or decide to go more upscale, the north shore of Kauai has lots to choose from.

• Kauai’s agriculture started in the early Hawaiian lo`i kalo (terraced taro fields) and continues to form a vital part of the economy of this tropical rural county.

• The aptly named Garden Island is, from an agricultural perspective, a challenging, but rewarding place to do business.  Kauai’s 365-day-a-year growing season affords farmers and gardeners the opportunity to grow everything from tropical fruits and flowers to traditional Polynesian and row crops, endangered native plants and exotic hardwoods.

• The largest coffee estate in the U.S. is the Kaua`i Coffee Company on Kauai’s south side which has 3,400 acres dedicated to growing an annual yield of 3.5 million pounds (60% of Hawaii’s total output).

• In terms of economic value, Kauai’s number one crop today is seed corn which is grown largely on west Kaua`i and exported to the U.S. mainland.  Other important crops include coffee, guava and taro.  Also, on the north shore, in the Hanalei Valley, roughly two-thirds of Hawaii’s six million pounds of poi taro (an important traditional Hawaiian staple) is grown and processed.

• Additionally, Kaua`i farmers grow papayas, bananas, tropical specialty fruits like rambutan, lychee and longan, row crops like bok choi and lettuce as well as hardwoods like teak, mahogany, albizia, and tropical flowers, although none of these are major crops now.

• Beef cattle are also raised and exported to the U.S. mainland while small hog and chicken operations remain for domestic consumption.

• The landscaping and nursery businesses are also important to Kauai’s agriculture --economy.

-For more information about agriculture on Kaua`i, visit the Hawai`i Department of Agriculture: www.hawaii.gov/hdoa

While Kaua`i has more than two dozen distinctive towns and communities, the County of Kaua`i can be broken down into four main areas plus the neighboring island of Ni`ihau which is privately owned and inhabited exclusively by native Hawaiians.

Kaua`i has a population of about 68,000 with the greatest concentration of businesses and homes on the east side of the island, between the residential area of Puhi, the county seat of Lihu`e, neighboring Hanama`ulu, Wailua (Homesteads and House lots), Kapa`a Town and the adjacent Kawaihau area.

The North Shore of Kauai:

Beyond Kilauea is the carefully planned resort community of Princeville, famous for its spectacular views of the Hanalei Valley, north shore mountains and dramatic seascapes.  Princeville is a peaceful place to watch the waves from high on a bluff, take a leisurely stroll or enjoy some of Hawaii’s finest golf courses.

In the communities of Hanalei and Ha`ena you’ll find local-style plantation homes as well as multi-million dollar residences nestled cozily between towering mountains and the rugged north shore.  These small towns tucked away at the end of the road are prized for their tight-knit communities and relaxed lifestyle.  Hanalei is well-known for its surf spots, taro fields and scenic beauty and has a small but thriving commercial center, catering to visitors and residents who enjoy living close to nature.

What are the coldest months in Hanalei?

January through March, with an average high-temperature of 77°F (25°C), are the coldest months in Hanalei.

What are the warmest months in Hanalei?

Warmest months in Hanalei, Hawaii, are July through September, with an average high-temperature of 84.2°F (29°C).

What is the driest month in Hanalei?

The month with the least rainfall in Hanalei, Hawaii, is June when the rain falls for 15 days and typically collects 4.4" (113mm) of precipitation.

What is the rainiest month in Hanalei?

The month with the most rainfall is December when the rain falls for 16 days and typically aggregates up to 11.1" (283mm) of precipitation.

Swipe to view. Touch to zoom.

No floor plans have been added for this property. 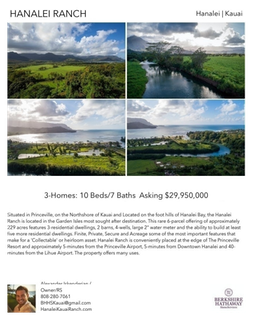 Mortgage calculator is not displayed when price is hidden or not set.

Welcome to the Berkshire Hathaway Hawaii Island Properties. As an Owner representing one of the most dynamic real estate brands in the world, you can expect the utmost professionalism and dedication to all of your real estate needs. From our very first meeting to the final closing, I m here to provide you with best-in-class service to help you buy or sell real estate. Equipped with the finest tools and technology, I'll guide you through the real estate transaction, every step of the way.

To exit demo mode:
Upload at least 1 photo
Add price & features
Assign an agent
Tip: For a great looking website, enter as much info as you can about this property in your admin panel.